On the Corner: An Introduction

Every single person in this world has their own view of what is right and wrong, or a belief whether or not God exists. When it comes to both ethics and God many (not all) people have a very vested interest. Some claim to live their lives in accordance to their views of God, and frankly that scares me.

Be you Hindu, Muslim, Christian, or whatever you call yourself, when you say that you live life according to your views of what God is, you make an incredibly bold statement. Perhaps a statement you take for granted. You are saying your ACTIONS are the result of your VIEW of God. In most cases I would like to make a bold claim in response:

One of two things is true when you say your life is lived according to your view of God:

I would like give an example that I hear often when it comes to the Philosophy of Religion. That God is All Knowing. Now some people believe God to be all knowing, but many act as if they believe God to not be all knowing. Many claim to believe that God is all loving and that we should do our best to emulate that love. Indeed Epictetus, the ancient Stoic Philosopher once said something along the lines of, “What better way to praise the creator than to be stewards over creation.” He also said, “Don’t just talk about your Philosophy, embody it!” Most of us however do not strive to be a reflection of an all loving God.

A much more striking example might be the Resurrection of Christ. An acquaintance of mine once told me that I could not be a priest, because I do not believe in the physical resurrection. I, like Paul Tillich and Peter Rollins, do not believe that saying you believe in the Resurrection amounts to much, if at the end of the day you see someone starving and do not help them to find food. If you see a homeless person trying to stay warm in the harsh winter, and you do not procure them shelter or a coat. That when you see someone struggling you walk on by and say nothing, letting them suffer alone. Many people claim to believe in the resurrection, but fail to live a resurrected life. Both Paul (of Tarsus) and Tillich put an emphasis on the resurrected life, they called it “The New Being” or “A New Creation”

Karl Rahner takes it a step further, “For only then are we really aware that the power of freedom is present in the midst of our prison, but we are not at all willing to liberate ourselves. This Power, which is called God and is felt as a contradiction of ourselves, judges us, because we really don’t want the kingdom of God at all.”

How could Rahner claim such a thing? How could he be so bold to say we really don’t want the kingdom of God at all? How dare he! It’s easy to see how he dares such a thing. He looks at those of us who say we believe something, and then do not act as if we do, or see us strive to attain what we say the goal is. Instead we either do not really believe what we say we do, or we are waiting for an intervening force commonly know as God, to come in and do the leg work for us.

I once wrote a parable kind of showing the disconnect of such a thing and I would very much like to share it with everyone now:

There was once a very successful lawyer who believed he owed his success to God. Every day he would wake up, thank God for the day behind him and the day ahead of him, and then get ready for his morning run.

“God!! If you will not provide this man who is clearly suffering with something to eat, I WILL DO IT MYSELF! What good are you if you can provide for me, but not for those who are suffering?!”

That day his life changed, the lawyer took in the homeless man, gave him a place to sleep, and some food to eat. He then helped him find a job, and get him on his own two feet. He then started programs to help others in similar situation, and dedicated his life to helping those who were suffering.

God was looking down and watching all of this. That day, the lawyer cursed God and denounced his religion, and that day the homeless man thanked God for helping him find something to eat. God smiled upon both of them, The homeless man because he was no longer suffering, and he smiled upon the lawyer because the lawyer had finally started to live as if he believed in God.

The story could have turned out much differently, the story could have ended with the lawyer believing that if the homeless man’s faith was strong enough that God would provide food for him, or that if the lawyer himself had enough faith that God would provide for the homeless man. The horror of the situation would then be realized. The homeless man would have died. The Lawyer would have either blamed the homeless man for not having enough faith, or himself for not having enough faith, or perhaps it would help him even in the death of the old man, to learn that we are the answer to someones needs or prayers, or perhaps someone else in the answer to our needs and prayers.

With this blog, and with this platform I want to explore how we can start to form an applicable philosophy based on our religious beliefs, or perhaps show you that you may already be living a life where you use one. I want to help others as well as myself explore more deeply the implications of what we say we believe and what our beliefs do or do not inspire us to do. And perhaps with a little work we can better develop what the life of the “New Being” or “New Creation” may look like.

Some of the things I read, and that I will share with you, might hurt our egos sometimes. This is especially the case when we look at ourselves more critically. I want you know that pain is normal, and growth doesn’t happen absent opposition. Often times, we are our biggest opposition. Perhaps it takes realizing that many of us do not really want the City of God, for us to really start building it. I am hoping that many of you will help me build that city.

Peace be with your spirit. 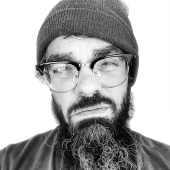 John-Marc lives just outside of Grand Rapids, Michigan, and spends most of his free time, reading or writing. His main focus is eliminating the perceived gap between Philosophy and Theology, that many seem to hold. He works for a rehabilitation hospital as a part of the Orthotics and Prosthetics + Bionics unit. He also aspires to create a safe place to for people to be able to express and unashamedly experience their doubt.

The Stoic on The Corner