Sermon: Caught up in the Life of God

God, help me by your Spirit to believe and speak truth, and help those that listen to recognise what is not. Amen.

“[T]hanks be to God, who in Christ always leads us in triumphal procession …”

This opening image of a triumphal procession is overtly political. The triumphal procession refers to the parade of the conquesting King returning home, declaring the “Gospel,” or “Good News,” of victory. (This image is where early Christians drew the familiar language of “Gospel.”)

Our reading from 1 Samuel also talks about a King. Or rather, Israel’s desire to have a King. The people of Israel, it seems, wanted to settle down like other peoples and rely on the security and stability a King could provide.

While God grants Israel’s request for a King, God also offers a warning: the price of a King is high. With a King comes the harsh realities of an economy that is geared towards maintaining the King’s visible status and power. The desire for a King, in the context of the ancient world, implied a desire to be like slaves in service to that King.

Framing our reading from 2 Corinthians 4 with reference to these overtly political images might seem, at first glance, surprising. After all, our reading seems to point towards an escape from the world, and not a complex political entanglement with the world.

2 Corinthians 4 talks quite hopefully about our being raised as Jesus was raised, into the presence of God (v14). Even though our outer nature is wasting away, this momentary afflicting is preparing us for an eternal glory (v16-17). What can be seen is temporary, but we hope for the eternal (v18). Unlike the people of Israel we should not seek an “earthly tent,” but a “building from God … eternal in the heavens” (v5.1).

At first glance it seems that Paul is pointing us away from the world, and toward the hope of some sort of afterlife, some sort of flight into heaven.

I want to suggest, however, that what Paul offers us is not a flight from this world, but a renewed movement towards the world. Paul offers us a renewed understanding of who we are, as individuals and as a community. This new understanding of who we are is built on the fact that we are caught up in the life of God, transformed, and called into service on behalf of the world.

In his first letter to the Corinthians Paul describes himself as “one untimely born” (1 Cor 15.8). There Paul is referring to the fact that he was not one of the original followers of Jesus, he was not one of the disciples that followed Jesus through his life and ministry. Rather, Paul’s conversion to following the way of Christ was precipitated by a religious experience. Paul was, as it were, drawn outside of himself in an ecstatic experience of the risen Jesus. In order to understand Paul we need to take seriously the fact that his own experience of radical transformation, and being drawn outside of himself sets the foundation for his understanding of faith. For Paul, to be drawn outside of himself means rethinking everything he understood himself to be: rethinking his Jewish heritage, and rethinking his place within society.

Understood in this way it is little wonder that Paul’s way of writing draws on references from the Jewish Scriptures, from the social and political practices of his day, and from contemporary philosophical and religious thought. As highlighted earlier Paul begins the argument that gets us to 2 Corinthians 4 by drawing on political imagery, Paul also draws on religious imagery – referencing the fragrance and aroma of sacrifices offered to the gods.

For Paul following the way of Christ draws everything in, it challenges us to rethink everything about ourselves, and leads us to a transformed understanding of who we are. Crucially, this transformation is built on the hope of resurrection. Not a hope, in the case of Paul, that was a long way off, that we will experience when we die. Hope for Paul is about being transformed now, because he experienced the resurrected Jesus now. The resurrection was not something he was moving towards after death, but was something that had already moved towards him. The resurrected Christ intervened in the life of Paul’s present reality. The resurrection had immediate consequence.

Paul only comes to faith because of this conviction: that the resurrection has happened, has interrupted and intervened in the present reality, and has immediate consequence.

“Do not lose heart!”

“peace over war – care for creation over degradation – welcome and embrace over exclusion – justice over exploitation – reconciliation over systems of oppression.”

As Paul goes on to say just after our reading, we groan in this world, we groan for a better world to be made real in this one. This groaning yearns for the life of resurrection, the life that vindicates the life of service to the vulnerable Jesus modelled. This groaning is a sign of our inner transformation, so that we might commit ourselves to an outward manifestation of the solidarity with suffering that Jesus live, and the critique of injustice that Jesus proclaimed.

Paul does not call us to think fondly of fleeing this world. But Paul calls us to experience, and to live the resurrection. To be drawn outside of ourselves, in service to the world — we are called to follow the way of Christ. Amen. 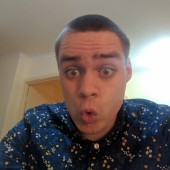 I’m a theology student at Pilgrim Theological college, part of the University of Divinity in Melbourne, Australia. I have a keen passion for the preached Word, and theological reflection that resources public theology. I also help manage a church-based social enterprise café.

Silent and Afraid: a project

Silent and Afraid #2: Baptised on the Way

Sermon: Pentecost – the Spirit and the Christ