“Let the words of my mouth and the meditation of my heart be acceptable to you, O Lord, my rock and my redeemer.”

Howard Thurman asks this question in his book, Jesus and the Disinherited. It is a question the Israelites must grapple with as they wander in the wilderness, facing a freedom that is life-threatening.

In the wilderness, survival is on God’s terms. In Egypt, the Israelites depended on a system to keep their bodies going, bodies that were enslaved and exploited. They lived on the empire’s terms. Even after the escape from Egyptian slavery, this system still had a hold on the Israelites’ spirits. Without food and water on their long journey to freedom, they longed even for the meager satiation they got in slavery. They cry out, “give us water to drink!” Satiation though, doesn’t always mean safety. Their souls were not safe. These were souls that underwent the humiliating conditions of slavery, and humiliation is corrosive to the spirit.

Moses asks the Israelites why they test the Lord, but God listens to their concerns about food and water and sees them as legitimate. A dialogue is taking place, and these things are not too much to ask of God–God miraculously provides food and water for them. Still, the Israelites are never satisfied with what God does for them in the wilderness. There is a fear they cannot shake. This fear was learned in slavery. Fear that perhaps God will be like their masters in Egypt–manipulative, cruel, and uninterested in their well-being.

It’s unsettling how fear creeps into our minds sometimes. For me lately, it has been manifesting itself in a desire to be self-sufficient, so I have been acquiring survival skills. I have learned how to tie knots such as the alpine butterfly loop. A life-saving knot, it can bear critical loads and be used to isolate damaged parts of a rope so you can still use it. Having lived through multiple natural disasters this year, these skills give me a little confidence. I feel more prepared for what might be coming next. But I have to constantly keep watch over this fear.

Knowing how to tie knots and use a compass can get you off a mountain or through a natural disaster alive, but there are more important things than knots.

If I don’t keep watch over my own mind, fear goes for my weak spots like a rot. Hope and resourcefulness can give way to bitterness, despair, and hatred. Isolation starts to make living feel like the dead.

Paul urges us today to “work out your own salvation with fear and trembling.” The life of a Christian is an uncomfortable one. It is a constant struggle to choose to fear the Lord instead of fearing worldly forces.

We see this struggle in Paul, who, as a free Jew living under Roman rule, is a colonized body. In his letters, we see him wrestle with his Jewish identity. Being in this social position at the point in time he is in shapes his imagination and the metaphors he uses, like the one we see in today’s passage. In the Christ Hymn, Christ is described as taking the form of a slave, humbling himself and being obedient to the point of death. Then, God exalts him and Christ is owed the respect and status of a slave master. Some scholars think it goes a step further to the master par excellence, or the Roman emperor.

What do we do with this metaphor? Slavery is a system of domination, fear, and violence. There doesn’t seem to be much here that speaks to liberation.

I think liberation can be found in Christ’s humility and the actions he takes: Christ humbles himself, empties himself, and is obedient to God. Jesus does not exploit equality with God.

This humility is a survival skill. Paul urges the Phillipians to “look not to your own interests, but to the interests of others.” This is an invitation to deep listening and laying aside of ego for empathetic connection. The reality of interdependence demands we care about the concerns of our neighbors and the land we live on in order to survive and flourish.

Individual knots are not enough. We need safety nets in a world that lets too many people fall through the cracks. The next stop on the Israelites’ journey is Sinai, where a judicial system is established and God speaks the words of the Ten Commandments. Law begins to be formed. Later in the Gospel of Matthew, Jesus states that all of the law and the prophets hang on love of God and loving your neighbor as yourself. Humility.

The poet Cheslaw Miloz writes, “Love means to learn to look at yourself/ the way one looks at distant things/ for you are only one thing among many./ And whoever sees that way heals his heart…”

Community heals the heart. Because of Jesus’ obedience and humility, Christians are one body in Christ. We belong to each other and to God. Jesus says to his disciples at the end of the Gospel of Matthew, “I am with you always, to the end of the age.” This is a love that saves us even in the midst of disaster and death. As we work out our salvation with fear and trembling, Christ’s humility heals something in us–isolation.

Humility is a survival skill, spiritual discipline, and a calling to engage in the work of healing injustice. Humility is a choice to fear the Lord instead of fearing “the Other,” or even death. Hoarding of wealth, for example, is essentially hoarding safety and resources. When faced with the existence of poverty, humility demands redistribution of wealth. The call to humility is a call for the church to reckon with its complicity in racism and how it allows for the murder of African Americans by police. Humility weaves intersectional safety nets. Humility, in individuals, institutions, and social systems, lifts us all to a higher place.

There’s an invitation to ask ourselves how God is calling us to humility during this time. How can we better listen to the concerns of our neighbors? Are there grassroots organizations around you working for justice you could support in any way? When in positions of power, let’s audit ourselves and ask whether we are using that power to serve the interests of others.

Keep watch over your own mind. In what ways does fear isolate you, and how can you turn to God? Humility helps us recognize interdependence and pushes us to act when faced with unjust situations and systems. We’re not isolated. God is always with us.

God provides for the Israelites in the wilderness. God is always providing for us. The question is whether we have the humility to see the resources God is giving us.

“Under what terms is survival possible?” Love of God and love of neighbor. Amen. 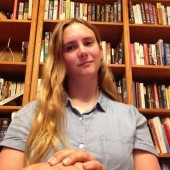 Paige Foreman is currently a third year Master of Divinity student at Yale Divinity School and Berkeley Divinity School. She has also studied interreligious dialogue and social justice activism at Pacific School of Religion as well as English and Philosophy as an undergraduate at Gallaudet University. She approaches scripture with the firm belief that God is on the side of the oppressed, often looking through the lenses of postcolonialism, disabilities studies, and feminism. In her spare time, Paige enjoys creative writing, martial arts, and open water swimming.

Swimming In Fog: On Instinct and Providence