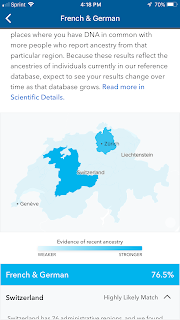 I recently had a DNA test taken to discern my ancestral heritage. The results were interesting; some expected, some surprising. Recently, they added mapping, pinpointing the areas from which my DNA probably originated. This contained a few surprises from the research I had done about my ancestry. Of course, a lot of what I state from my observations is pure speculation on my part.
This first image is no surprise. The Klemmer (Clemmer/Clymer) name had several generations living in the Zurich area of Switzerland. Many of my relatives from the Franconia area of Pennsylvania since 1720 married into other names that came from this region.
The Bern area was where my mother’s family came from. However, not only did Horsts come from this area, but I have many other relatives that married people from this area: Wenger, Hershey, Gehman, Martin, High, to name a few. 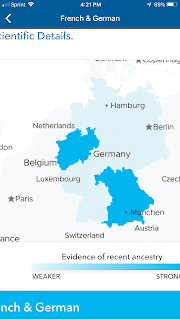 This second image is a little more surprising. The bluish area near Luxembourg is not surprising,

since the Sensenig (my maternal grandmother) line came from this region. However, there is no indication of any DNA of mine being found in the Palatinate (between the two highlighted blue areas). This is where I assumed the Klemmer line moved to from Switzerland. In my research, I found a Klemmer relative from the area, but not my specific ancestor Valentine.

On the other hand, Bavaria is a strong area my DNA. I have found nothing about Bavaria in my ancestral research. I did discover that there are a lot of HorschMennonites living in Bavaria even today, but haven’t made any personal connection to them as yet. 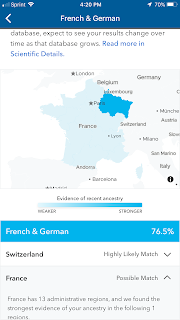 The third image is very interesting. This area of France was settled by many Anabaptists fleeing persecution in Switzerland, in what is called the Alsace. This area of France passed back and forth between Germany and France, and many of the area still speak German. There is some indication that the earliest Klemmer(Klymer) came from this region of France and then moved to Zurich. Did my Valentine Klemmer return to this region? Of course, with inter-marriage between Mennonites of all central European regions, I could have had other ancestors from this region of 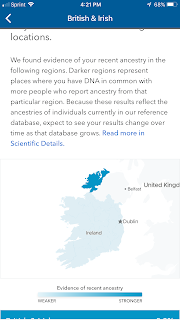 Finally, the fun discovery. Nearly 10% of my DNA comes from the County Donegal province of Ireland. Who of my relatives ventured outside the Central European German-speaking ambit to marry and Irishman (woman)? Did it happen on this side of the Atlantic, or in Europe? Is it simply part of the Celtic DNA that left traces all over Central Europe until they were isolated in Ireland?
I am waiting for one more mapping result. I have 2.3% DNA

from the Iberian Peninsula. They don’t have enough information yet to pinpoint from where my DNA comes. I highly suspect it will be Galicia, the northwestern part of Spain because it is a Celtic enclave. Legend has it that Celts from Galicia made their way on

ships up the Bay of Biscay to the Celtic Sea, and on to Ireland to settle.