A School of Fools 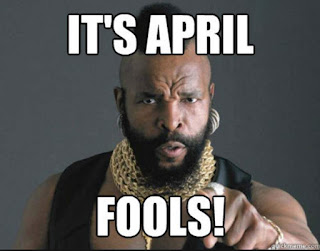 Today is April Fool’s Day, the day of jokes, pranks and attempts to deceive.  A “fool” on this day, would be considered the butt of a joke, the one who is deceived or pranked.  In the range of meaning of “fool” we would include the uneducated oaf, the intelligent person who is unwise in everyday matters and the one who ignores the path of everyday society, usually to their own detriment.
Paul called himself a “fool for Christ”, not in the sense that he was uneducated, but that he ignored the wisdom of the world to embrace a philosophy and a way of life that was damaging to himself and his very life.  He recognizes that there are those who would be “wise” for Christ, those who walks a careful path not to disturb either their religion or their society.  He was never like that.  He jumped in, both feet, into the abyss that is Christ, not looking to escape with his life.   And so he changed the world.
He was not the first.  Peter spoke out against the powerful body that killed Christ, was arrested, threatened and eventually killed.  Stephen spoke boldly before his enemies who brutally and immediately killed him.  James was arrested and killed, mostly on a whim.  All this within a year of Jesus’ death.  To continue on this path of martyrdom was foolish, but these early followers of Jesus were passionate and determined to bring justice into a world that did not deserve it.

The path of foolishness did not end with this generation.  Although the movement became more than a group of fools, there were always the minority of extremists who pursued the cross, who swam in the pond of non-conformity.
The Pilgrim
An anonymous, barely literate peasant wandered throughout villages of Russia, begging for his bread and praying a single prayer every minute of every day.  “Jesus, Son of God, Savior, have mercy on me a sinner.”  Although he seemed uneducated and worthy of mockery by some, others saw him as a fount of wisdom and his inspirational biography is read to this day.
Francis of Assisi
He began an order of monks who would own no money or possessions.  You might think, “Well that was easier in the 13th century than today”, but it was not.  Francis was just more determined, and his followers lived in caves and what churches would allow them to sleep in pews.  He would beg for himself and for his fellow monks, singing and preaching foolishness. Occasionally Francis would be invited to a dinner and he would not even sit down at the table, but find the proudest bishop and beg that man for food, as the wealthy one sat down to eat. He finally died of open wounds that he begged from God so that he might be more Christ-like.
Ignatius of Loyola
A disciplined soldier who was injured in war, he was in bed for months with nothing but a bible and a book of saints to focus on.  He dedicated himself to Christ as his master and attended classes at the University of Paris for years, while he lived in the fields, homeless.  He collected a few followers who began the Jesuit order.
Damien of Molokai
Determined to help the needy, this Belgian priest served at a leper colony on the island of Molokai.  He cleaned wounds, buried his friends and created a joyful community.   Of course, he died of leprosy.
Anthony of Egypt
Ashamed of the “Christian” society that developed in Alexandria, Anthony chose to live in a cemetery instead, and eventually left the safety of the city altogether and lived in the desert. Some would come and seek counsel and then others came to live his hermit-like existence in nearby caves.  His foolishness became the Christian monastic movement.
Keith Green
A rock star who dedicated himself to Jesus, he sold his albums for what people could afford and wrote radical Christian articles for his very popular newsletter. He sang and spoke of radical hospitality and of self-sacrifice.  On a private plane in his organization’s property in Texas, he overfilled it with his children and friends and they all died.  But millions were inspired by his powerful message and music to follow Jesus.
So many in the cloud of witnesses we could name: Martin Luther King, Jr., Conrad Grebel, Mother Theresa, Meister Eckhart, Maximillian, Vincent Van Gogh, Dietrich Bonhoeffer, Grandma Moses, Claire of Assisi, Stephen Biko, Mimosa, and more that time does not allow me to speak of.
***
I am proud to call myself a minor fool for Christ beside these martyrs and saints.  I will not boast but in my idiocy, my poor attempt to follow the path Jesus created on his way to death.  I quit my job, making me and my family homeless for months in order to better appreciate and serve the homeless.  My life was threatened and my body was attacked for wanting to serve.  I held poorly attended services, proclaiming the peace, love and power of Christ, which few wanted to hear.  I gave opportunities to serve to the poorest of the poor, some of whom were felons, drug dealers, prostitutes, addicts and thieves.  I invited some of these to live in my home.
One of my great projects over the last few years was to transform a mostly empty church facility into a vibrant community center for the homeless, immigrants, poor and destitute.  Four separate church groups, of different denominations, met there, and for many hours a day there were showers, food, clothes, garden, shelter, work opportunities, and contacts with other services.  It was known as RedBarn (because of the large red barn on the property) and it was loved by those who used the services.
But the project was hated by many who lived around it and the police, for they saw the poor as reducing the value of their homes, as a center for criminals to gather, as enabling the very people they wanted to drive out of their community to remain.  A few worked for years to drive us out, reporting us to the city for crimes they could not actually see.
Eventually, one of the people I helped get off the street located his drug distribution business on the property, bringing in the very criminal element that the neighbors and police were so concerned about.  I shut it down, and the city eventually fined the property 3000 dollars for not cleaning it up quickly enough.  I quit managing the property due to the stress of managing the expectations and needs of the poor, the city, the denomination who owned the property and my vision of the peace of Christ.
I understand now.
There is a reason that the community of Christ is a community of fools.  It is because to fight to meet the needs of the outcast is to declare war against an entire society, and they will not accept it.  They will fight and eventually kill you.  If they can’t tear you down quickly, they will do so slowly.
So I will follow the command of Christ: when they persecute you in one place, go to another.  I will rest, and gather my wits.  But I have not given up on the outcast, who need support.  And I have not given up on foolishness.  No, I am in a lull, but I already feel the foolishness of Christ rising up in me again.  Watch and see.