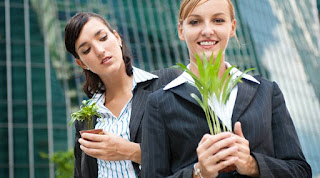 I guess I’m some kind of lecture junkie.  I signed up to Audible and at my cleaning job instead of listening to novels, I’m mostly listening to audio versions of The Great Courses.  My favorite one so far is the one on Worldwide Mythology, but the ones on neuroscience and philosophy also are favorites.

So I’m listening to one on the philosophy of emotions, and I’m nodding my head (when I can between vacuum strokes) in agreement with the speaker.  He is explaining that our emotions are all based in rational processes.  Anger encourages us to respond to injustice, fear causes us to avoid danger, disgust can help us to avoid sickness.  The speaker is going through all the main emotions, explaining their foundations, but he stops short at one.

He explains, “Every emotion has a good purpose for them, except for one.  I can’t, for the life of me, understand what the purpose of envy is for.  Envy just seems to only cause problems for solutions and doesn’t ever come up with a solution.”  (I am paraphrasing, here)

As a philosopher, he can understand the purposes of jealousy and fury and lust, and they all have good purposes, but he couldn’t understand the basis of envy.

I have to agree with him that all emotions were created by God in order to motivate us to do what we must.  They are indicators that something is wrong and they push us into a direction to act (or, in the case of depression, to not act). Yes, if we give into these “pushes”, we can easily head into extremes– rage, isolation, anxiety, and others.  But usually we don’t have to.  Usually we can use our emotions to consider situations thoughtfully and make decisions based on the information that our emotions give us.

Many of us would agree that envy doesn’t have any purpose.  Of course, if we didn’t think about it, then perhaps we wouldn’t see the positive purposes of anger or depression.  What could the positive purpose of envy be?  After all, it is a sin, right?

Envy is, of course, looking at what someone else has and wishing that we had the same.  Envy can lead to anger that another person has what we want or even theft, but it doesn’t have to go that way.  However, envy is clearly used in our society of consumerism to direct us into forcing us to obtain the useless items others have.  There is so much stuff, advertising is used to create a desire in us for what we do not actually need.  This is excess, it is greed and envy is at the bottom of it.

But what if we were a farmer, barely scraping by in the ancient world?  We planted the seeds, prayed for rain, but rain never comes when you need it or in the right amount.  Then you see that a neighbor has a creek right by his fields, with ample water for all his farm and more.  He has a system in which all his crops get just the right amount of water.  And you are envious.  You wish you had that creek.  You wish that you could live well as he does and have his wealth so your family wouldn’t have to starve over the winter.

That envy works in you, but instead of just becoming angry, you consider ways that you might have the same opportunity as he has.  You could dig a gully, and use the water for both of your farms and then his benefit wouldn’t be just his but yours as well.  So you approach him, and he is doubtful about the idea, but then you offer him something that he doesn’t have so he reluctantly agrees.  You dig a ditch toward your land from his creek, and block it off except for the times he isn’t using it. Because you are a good neighbor, you arrange a schedule so you don’t use the water on the days he is using it.  And when it rains, neither of you use the water.

This is the good of envy, a motivation to the lifestyle of others so that all can survive.

Why did my philosopher/psychologist lecturer not understand this?  Because all he could see was his life of over-reach.  For the majority of Americans, envy is a detriment, forcing people to use their resources for their bloated “needs” (like Audible?) instead of making sure that all people have their needs met.  But for the people I work with, the third world that lives within the United States, envy is sometimes a problem, but sometimes a solution.

Envy causes people to gather more possessions than they can carry, forcing a few to push around a train of shopping carts full of possessions that they might use, but probably can’t.

But envy also looks at the thousands of acres of empty backyards in our city, so they ask people if they might be able to camp in one, making a mutually beneficial agreement for their own survival.  Envy motivates the poor to move into a shelter or into an apartment, not continuing to live on the street.  Envy sees the innovations of other people on the street, from dumpster diving to recycling to seeking day labor in order to live better than they had been.

Interesting that my lecturer couldn’t see this.  But, of course, how could he?  He is separated from the majority of humans throughout the history of the world who had to struggle to survive and every innovation might be the one that saves us.  Envy forces refugees to flee bombs and try to enter into another country, despite the dangers. When we separate ourselves from the poor, we are separated ourselves from our inheritance.

It is for our own benefit that we not separate ourselves from the poor.  Not just for self-understanding, but for our own emotional and moral well-being.