If you’ve spent any amount of time on the Internet lately, you’ve probably heard of Jordan Peterson: a charismatic professor of psychology turned guru dad to the discontented young men of the western world. His meteoric rise has been swift, prompted by his refusal to use non binary pronouns, and he is now a figurehead of the anti-pc, anti-social-justice-warrior movement. The New York Times has described him as the most influential public intellectual of the western world.

Peterson is a complicated figure, and I’m not interested in reducing him to heroic, or villainous caricatures. His most recent book, 12 Rules For Life: An Antidote to Chaos (which is also the most read book on Amazon right now) is, in places, genuinely helpful. 2 or 3 pieces of the advice he offers have been truly helpful to me, and I think his self authoring course has merits. Go an inch beneath his often obvious advice, though, and you run into some problems.

I normally don’t have an entire show dedicated to the critique of a public figure, but I think Jordan Peterson and his wild success need to be understood. I’ve been searching for some cogent criticism of Peterson, and Douglas Lain has offered some of the best critiques I’ve found on the web. In this episode of Sacred Tension Douglas and I discuss his offer to debate Peterson, Peterson’s flaws as a public intellectual, why Douglas describes himself as a “wannabe Marxist,” and much more.

Douglas Lain is the publisher of http://www.zero-books.net, a novelist, a podcaster, and most recently a youtuber.
His most recent novel, entitled BASH BASH Revolution (https://www.amazon.com/Bash-Revolution-Douglas-Lain/dp/1597809160), received a starred review in Booklist, and his previous novel After the Saucers Landed  http://www.amazon.com/After-Saucers-Landed-Douglas-Lain/dp/1597808237) was nominated for the Philip K Dick Award.
Douglas Lain is also the host of the Zero Books podcast. His first podcast, entitled Diet Soap, ran for over five years.

If you want to learn more about Douglas Lain, listen to his podcast, or watch his youtube channel, go to www.douglaslain.net 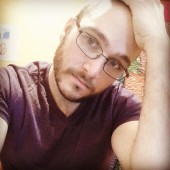 Stephen Bradford Long is a queer, heretical, doubt-filled Christian. He received his BM from Montreat College in 2016, and now works multiple jobs as a yoga teacher, grocery store manager, and host of the Sacred Tension podcast. His podcast and writing focus predominantly on the intersection of faith, doubt, and sexuality.

The Spiritual Discipline of Asking Questions